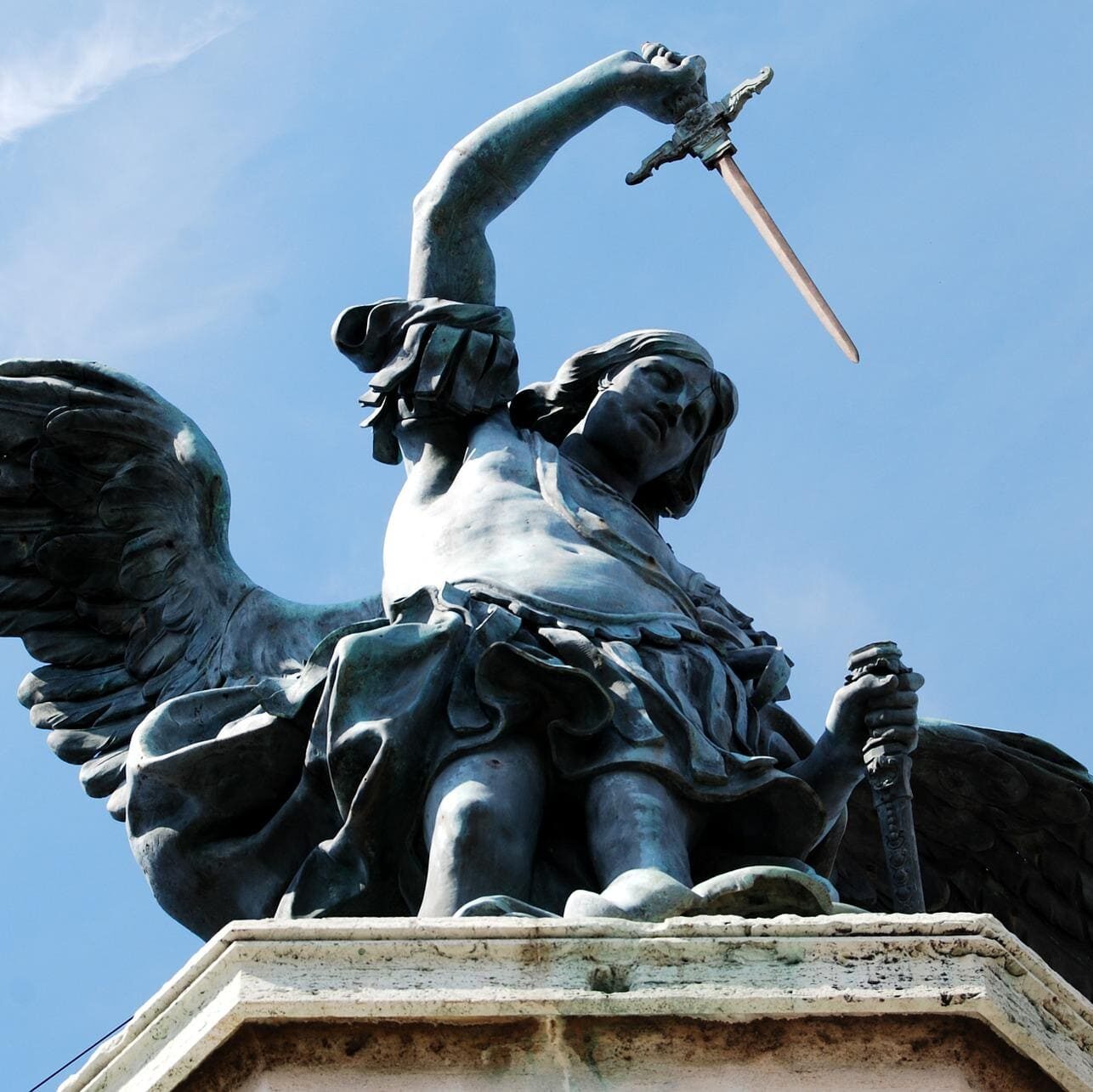 Among the legends that cradle the Castel Sant ‘Angelo, it is necessary to know some of them…A famous Italian singer, Claudio Baglioni, in one of his most famous songs, spoke of the love stories born during walks in the edge of the Tiber.

Also in this article we will talk about a love story that lasted about two millennia, marked by the weight of time and culture.

In fact, we are talking about the Castel Sant’Angelo, which you will be able to see for sure during one of your walks along the Tiber, the river that bathes the Italian capital.

Take a walk along the river and you will find the entrance to Rome’s Castel Sant’Angelo. Perhaps after visiting Saint Peter’s Basilica since the monument is located on the edge of the Vatican.

You will not be able to miss this imposing circular structure with a particularly curious shape that reveals a wonderful story within it. It is at its top that you will find the majestic statue of sculpted by Michelangelo especially for the Castel Sant’Angelo in Rome.

How to get to Castel Sant’Angelo? His location.

It is named after the street in which it is located; in Lungotevere Castello, 50 in Rome. You can get there from different neighborhoods, but the closest metro station is surely Lepanto located on line A.

There are also buses and tourist lines that can take you to Castel Sant’Angelo (Saint Angel’s Castle):

If you arrive at Termini station you can take bus 70 for 12 stops to Via Vittoria Colonna and after 150 meters you will see it.

Why is it called Castel Sant’ Angelo?

It seems that its name was inspired by an event that occurred in the year 590, when Saint Gregory the Great organized a procession to defeat the plague that had hit the city.

When he arrives at the castle during the procession, the Archangel Michael appears at the top and announces the end of the plague with his sword.

It was for this reason that the name of the Mausoleum of Hadrian was changed to Castel Sant’ Angelo.

Built in Roman times, AD 123, by Emperor Hadrian whose final destination would be as his mausoleum to hold his own remains and those of his family and, of course, his descendants . The part dedicated to the mausoleum is now incorporated into the castle.

At its top, it featured an imposing statue of the emperor on horseback.

Its grandeur, its history and the freshness with which it appears despite its age, remind us of the main reason why we must visit it: art.

Castel Sant’ Angelo introduces us to an ancient world that still dominates today and gives us the best insight into Roman culture. Visiting Castel Sant’Angelo Rome means stepping into something magical and austere at the same time, unchanged by time.

Why visit Castel Sant’ Angelo on your trip to Rome?

If you are staying in Rome for a few days, the answer is obvious: visiting this place means fully immersing yourself in Roman art, culture and the world. As you enter the castle, now a museum, you will be surprised many times.

A visit that already begins as we said from the banks of the Tiber, from where it emerges in a truly glorious grandeur.

The visit can then begin: we are in the heart of Castel Sant’Angelo, the Mausoleum dominates immediately before our eyes. We descend the helicoidal and diametral ramp and can reach the Hall of Urns with the burial chamber of the imperial family.

Inside is a splendid marble tombstone with a poem written by Hadrian himself for his soul.

“Little lost and gentle soul, companion and host of the body, you will now descend into colorless, painful and bare places, where you will no longer have the usual amusements”.

Very touching and illustrious, Hadrian was an alert emperor, capable of great things and above all a man of culture. Over time, and at the time of Aurelian, that is to say in the 3rd century AD, the Mausoleum became a military outpost and dedicated to the security of the city.

Thus, during the visit, we will be able to see how close it is to the Tiber and how precisely it could serve as a fortress for the defense of Rome.

Over the years, as we will see during the visit, Castel Sant ‘Angelo has been the stronghold of several senators such as Teofilatto, the Crescenzi, the Pierleoni and also the Orsini.

The Last Orsini; was also Pope Nicolas III, it was he who built a passage connecting the castle to the Vatican: Passetto di Borgo.

From 1300 it was also used as a fortress to house the popes during the difficult times the city experienced. During a visit, one realizes the beauty of the apartments built to accommodate them. The latter were decorated at the request of Pope Paul III Farnese in 1500, also by Raphael.

In fact, today we can visit the Cortile dell’Angelo (Courtyard of the Angel) with the beautiful statue of St Michael the Archangel from 1544.

Inside we also find the Prigioni Storiche (Historical Prisons), rooms where illustrious figures such as Benvenuto Cellini, who is remembered as a great man of study and a wonderful sculptor, were also housed.

The terrace of the Angel.

At the castle, it is also possible to visit the terrace of the Angel, at the very top, where you can see the bronze statue of the Angel made by Peter Anton Verschaffelt in 1752 on the order of Pope Benedict XIV.

The rooftop is also famous for the opera “La Tosca”, in which a young girl throws herself from the castle after learning that her beloved is locked up in the castle dungeon and executed soon after.

How much does the visit to Castel Sant’ Angelo cost? Price ? Tickets ?

To visit it, you can book your tickets directly on our partner’s website by following the link here. Skip-the-line Castel Sant’ Angelo tickets.

The full ticket costs 15.00 euros and the reduced fare ticket 2 euros. To get the best view of the place, you can download a free app in 7 different languages.

Visiting hours are very flexible, in fact you can visit:

We wish you a wonderful visit to the city and to Castel Sant’Angelo!