In this article, you will find out why it is essential to visit St. Peter’s Basilica in Rome and what you should absolutely pay attention to as a visitor.

Admiring the splendor of the most famous basilica in the world, you will feel unique and at the same time very small.

If you are faithful, at least once in your life, you should admire such a work. This cradle of faith can also be discovered through the richness of its architecture and the works of art it houses.

Reaching St. Peter’s Basilica via Via della Conciliazione, you can admire the beauty of one of the largest Baroque squares in the world. This is where you arrive if you take the tourist bus, click here to see the booking options.

Before Bernini’s intervention, it looked very different from the one we know today, without a precise shape. 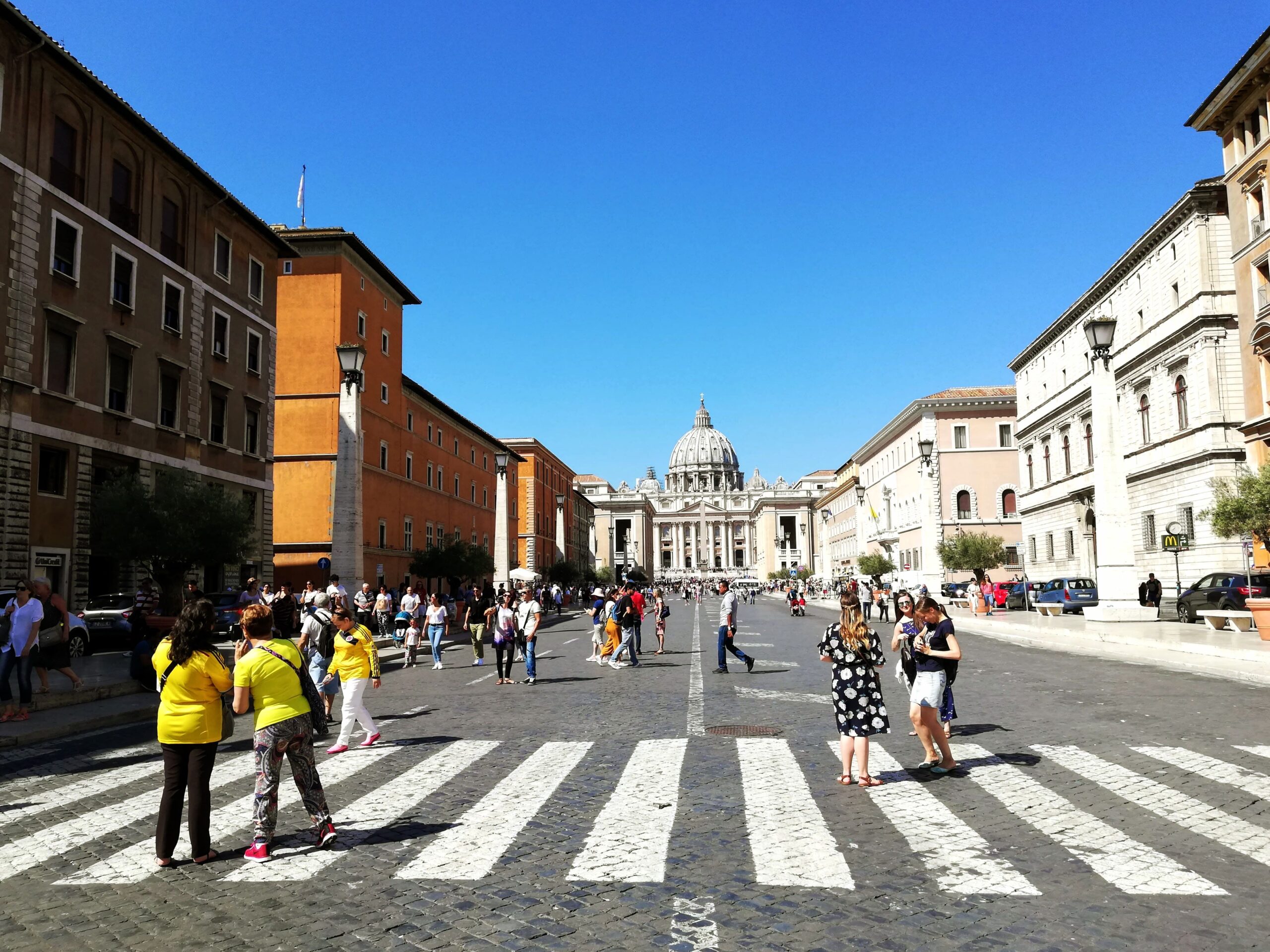 This is how Pope Alexander VII Chigi wanted to give more dignity to the house of the Apostle Peter and therefore called on the architect to carry out his major project.

Bernini built it in the aspect we know today between 1656 and 1667, in two different parts: an oval part with hemicycles and columns and a trapezoidal square.

The colonnades have no less than 284 columns and are arranged in 4 rows. Above them are no less than 140 statues of saints, each 3 meters high, and 6 coats of arms of Pope Alexander VII. 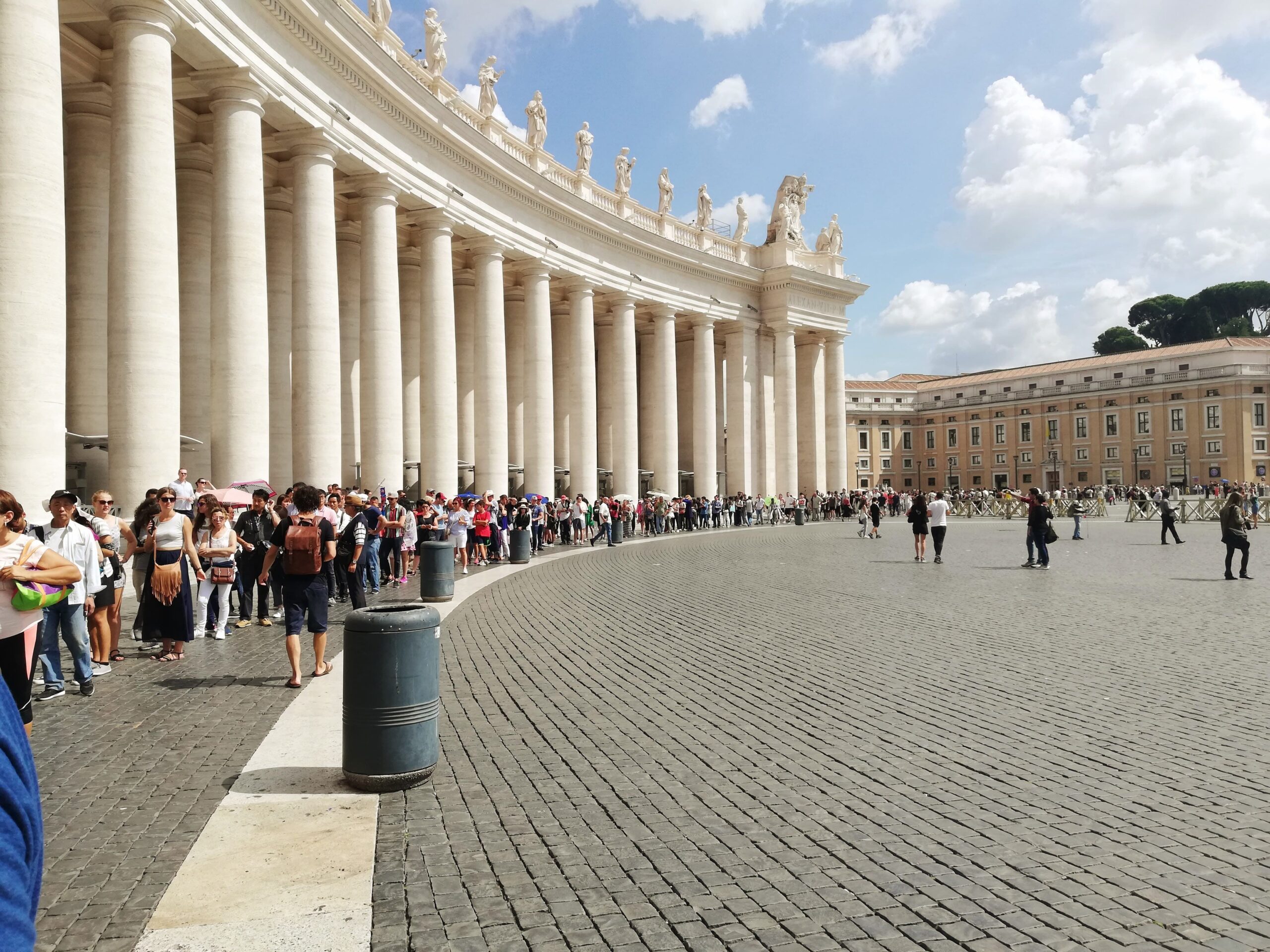 What was Bernini’s idea of ​​Piazza San Pietro? Impressive architecture!

The first idea was therefore to create a colonnade that could represent the embrace and devotion of the faithful in the square. A true open-air work of art, it provides, along with the Vatican Museums and the Sistine Chapel, a feeling of peace and tranquility for the visitor.

The obelisk in St Peter’s Square in Rome.

An obelisk similar to the 13 others in the city, in red granite, the second tallest in the Roman city. In 40 AD. Caligula, brought him on a ship full of lentils so he couldn’t be erected inside what we know as Nero’s Circus.

The obelisk remained there throughout the Middle Ages, a monument to martyrdom Peter, to the greatness of Rome and of course to Julius Caesar as his ashes were thought to be at the top.

Pope Sixtus V had it moved by Fontana in the 16th century, so it is where it stands today. On either side of the obelisk are two fountains and the two statues of Peter and Paul. There is also a beautiful sundial made by Luigi Gili in 1817. 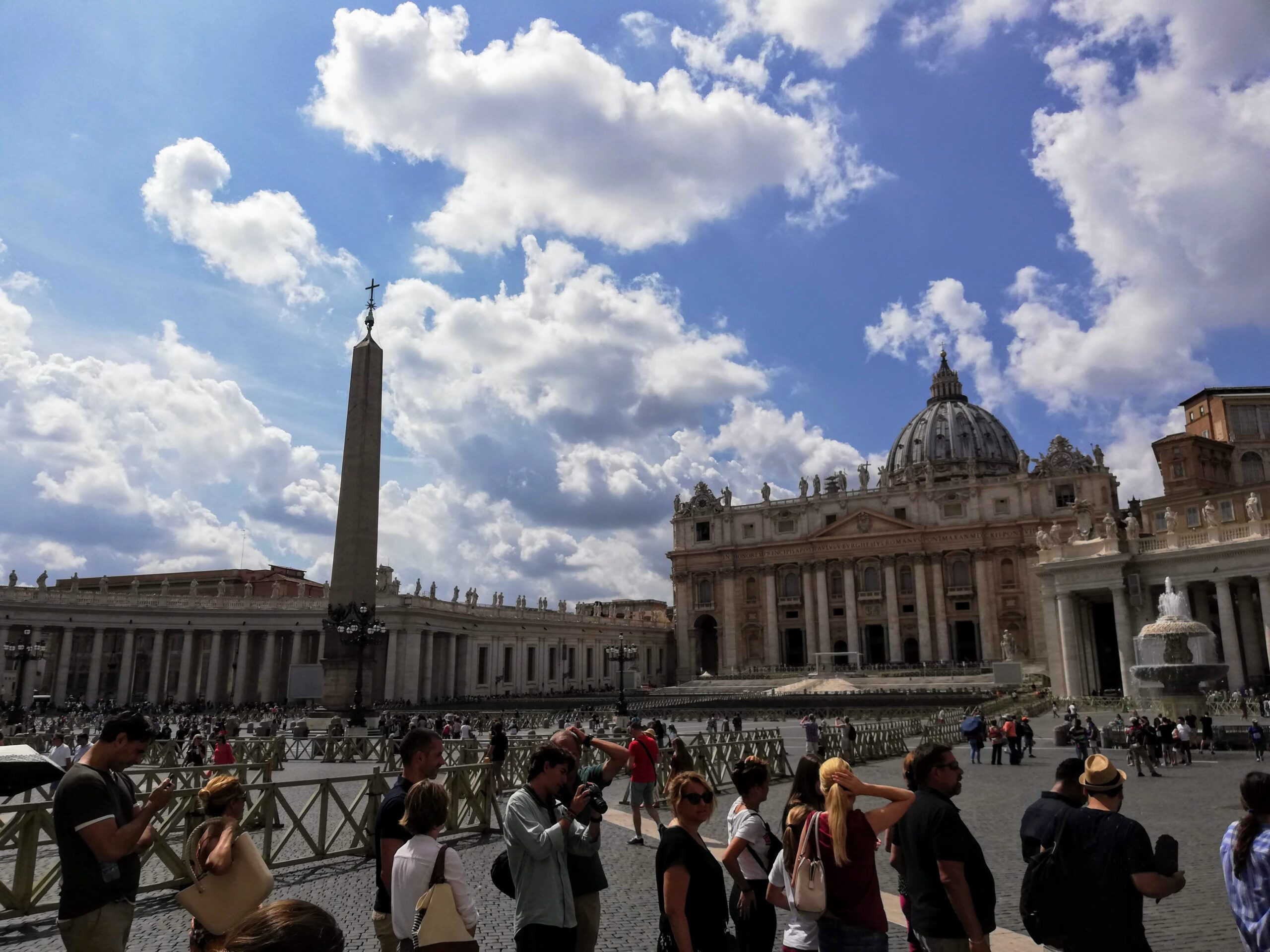 The importance of this place in the world and in religion.

It is an important and imposing work, not only for Christianity but also for the solemnity and elegance it represents. It is the largest church in the world and it is rich in symbols. The shape is elliptical and represents the universe, the portico represents the open arms of the church and the statues of the saints serve as a mediator between humanity and God.

Today, St. Peter’s Basilica welcomes a very large number of pilgrims, many of whom come to attend services. Others are tourists who want to enjoy Christian architectural beauty and then visit important sites such as the Vatican Museums.

For a well-thought-out visit, you have to start from the outside, which we have already described with the entrance directly overlooking St. Peter’s Square. Once inside the basilica, we can admire Michelangelo’s Pietà, one of the most beautiful marble sculptures by Buonarroti. The statue was sculpted when the author was 20 years old and is the only one signed by Michelangelo himself. 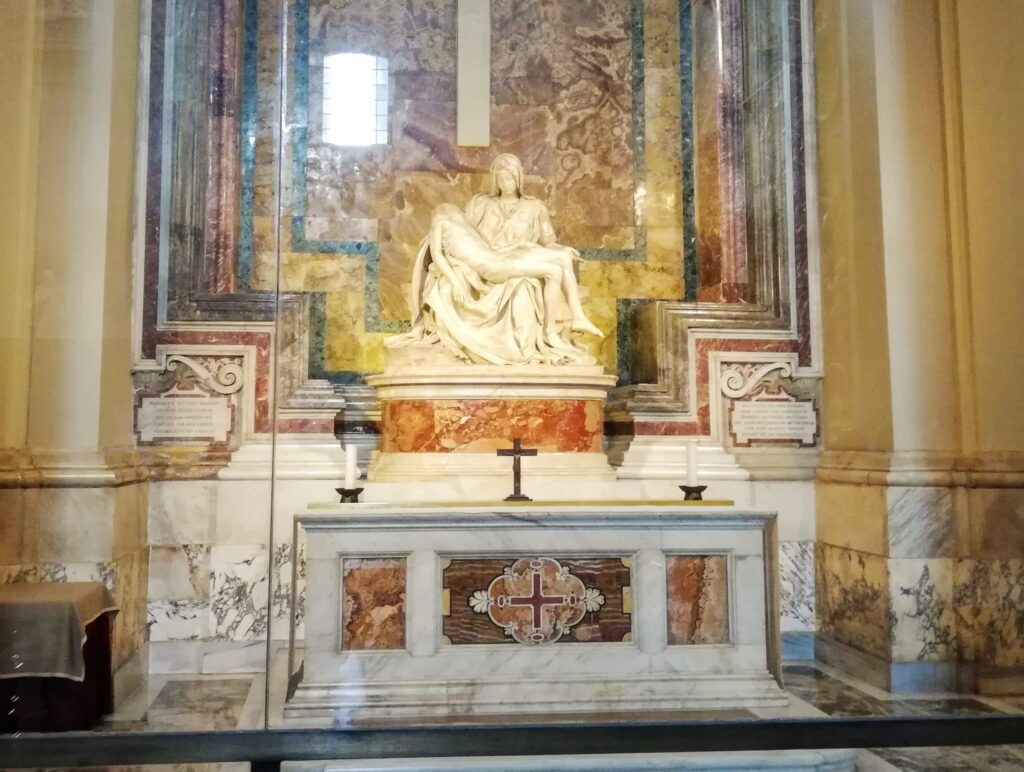 The dome of St. Peter, or as the Romans call it “er cupolone”, as in the famous song by singer Antonello Venditti, measures 42 square meters in diameter. A truly spectacular dome, a design Michelangelo worked on until his death. For a visit outside, you can climb the 231 steps that lead to the top of St. Peter’s Basilica, one of the most beautiful panoramic views in the world.

The Baldachin. One of Bernini’s greatest and most famous works, in which Borromini also took part. A really important work, especially because of the enmity between the two, but not only because it marks the very place of the burial of Saint Peter. It is one of the most famous Baroque works due to the complexity of its design.

At the end of the basilica we find the pulpit of Saint Peter, that is to say the throne where the bishops usually sit. This, according to the Catholic religion, actually belonged to Peter. It is a combination of art and history.

For an evocative visit, we also recommend a night or rather evening visit to Saint-Pierre. The lights are really great and you can see the place in a wonderful atmosphere.

How to book your ticket? How much does a ticket cost ?

Admission is free, but you can buy an audio guide for the visit or to climb the dome.

It is however important, in the case of a guided visit, to book in advance because many believers want to visit Saint-Pierre. The queues on weekends are very long, so you can buy a skip-the-line ticket here, which will be much appreciated when the time comes.

To visit St. Peter’s, we recommend that you get off at the Ottaviano metro station, as for the Vatican Museums. As for the visiting hours, they are:

In general, a visit with a guide can cost around 40 euros, but you have to take into account the fact that you are in a group and especially the people you are visiting.

Virtual tour of St. Peter’s Square, is it possible?

Well, it is possible to do it through the cultural heritage site and through Google Street View. Thanks to the website of the University of Pennsylvania (USA), you can also visit the interior of the Basilica in virtual mode.