From the Colosseum to the Roman Forum, via the Palatine Hill

Along with the Imperial Forum and the Colosseum, the Palatine is certainly one of the most visited museum sites in the world.

This huge amphitheater, whose imposing ruins give an idea of ​​its ancient splendor, was started by Vespasian in 72 AD and finished in 80 by his son Titus.

Jewish prisoners were employed in its construction. Its real name is “Flavian Amphitheater” but it is more commonly called, perhaps because of its proximity to the Colossus of Nero.

There is not a single page in the history of Rome that is not directly or indirectly linked to the Colosseum. The Colosseum has become over the centuries the symbol of the “eternal city”. 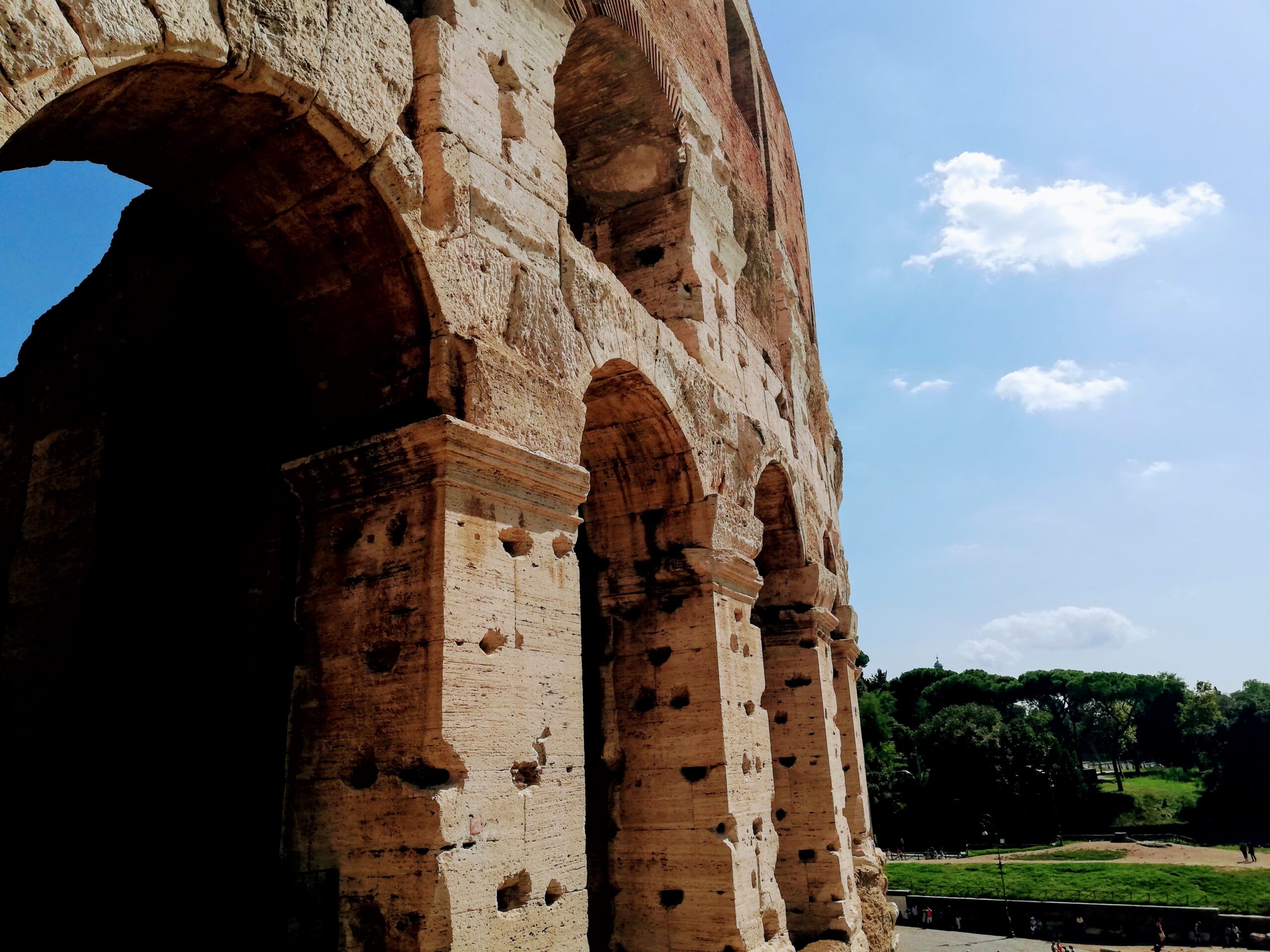 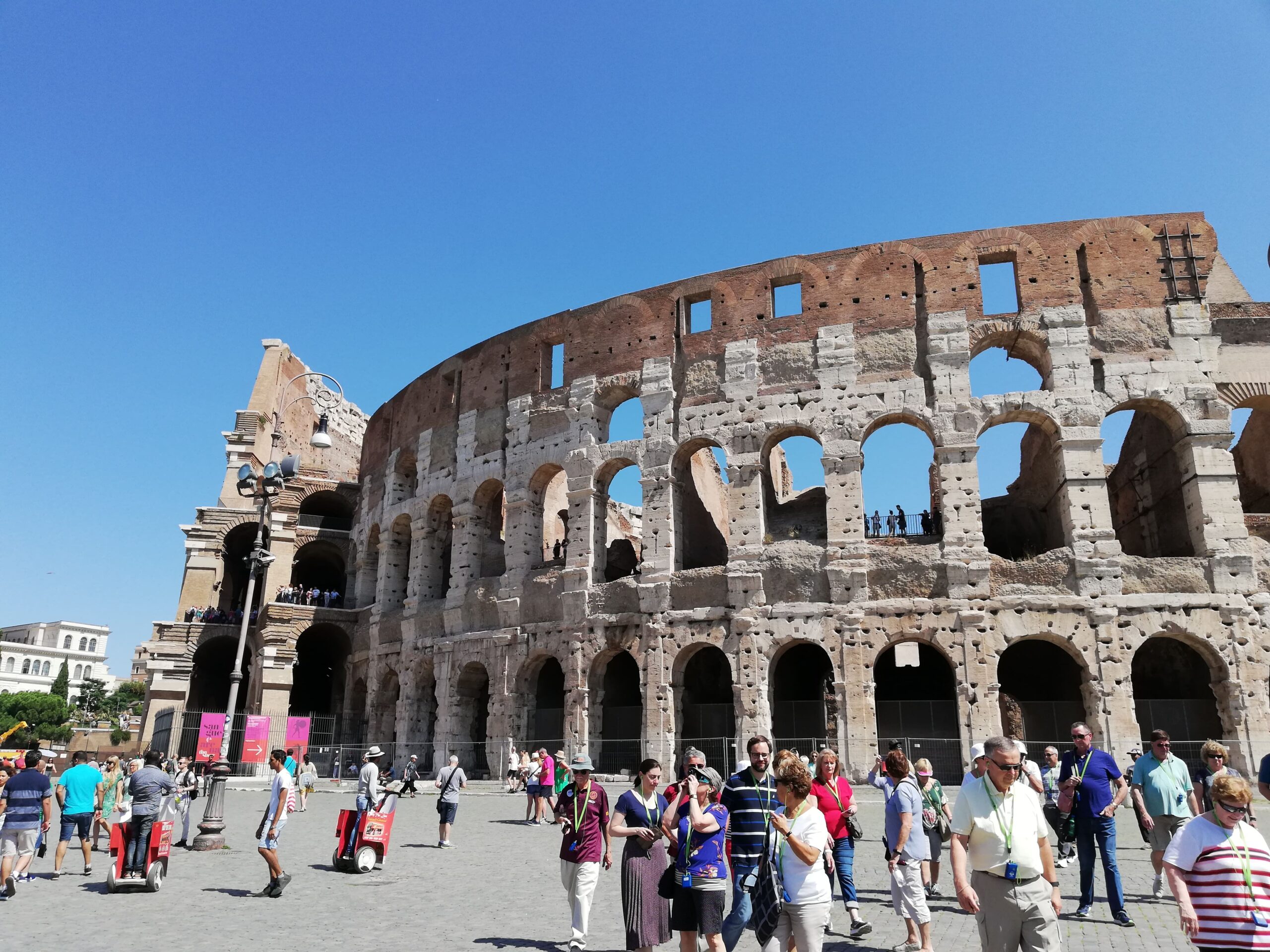 Where is the Colosseum?

If you are driving through the center of Rome and are on Via dei Fori Imperiali, you will need to cross the neighborhood to get from Piazza Venezia to the Colosseum.

You will find several buses, as many tourists decide to pay a visit there. You can book the red bus on our partner’s website click here

For transport, we recommend:

We strongly advise against using a car as this is one of the most visited places unless you want to get there by private car or taxi.

Why was the Colosseum built?

The Colosseum corresponded to a gigantic stadium of our time, even if the kind of show offered was of a completely different kind. The Romans loved circus games (ludi circenses), games which were certainly created towards the end of the Republic with the aim of stimulating and nourishing in them a warrior spirit and a feeling of omnipotence in the face of the world.

This is how the gladiators that you surely know were born. As the famous film Gladiator demonstrates, fighters were trained and would die if defeated as savage and ferocious beasts of all stripes.

An indispensable place of entertainment, a symbol for the Romans.

This place of spectacle, which can accommodate between 50,000 and 75,000 spectators, was used for venationes (wild animal fights), munera (gladiator fights) and other public spectacles such as the executions of prisoners sentenced to death, re-enactments of famous battles and dramas based on Roman mythology.

The Colosseum has been mined for nearly 500 years, with the last games spanning the 6th century. The building was finally abandoned during the High Middle Ages. It was later used for various purposes such as dwellings, craftsmen’s workshops, the seat of a religious order, a fortress, a quarry and a Catholic Christian sanctuary.

The Colosseum is currently in a state of ruin, due to earthquake damage and stone salvage. Despite this, it still allows us to imagine the measure and power of Imperial Rome.

Today it is one of the symbols of modern Rome, one of the most popular tourist attractions. It retains strong ties to the Roman Catholic Church as each Good Friday the Pope leads a torchlight procession on a Stations of the Cross leading to the amphitheater.

The Colosseum is depicted on the Italian 5 cent Euro coin.

What was the Colosseum used for??

The Colosseum was used to host gladiator fights and to organize other very varied games. In the morning there were the presentations of all the participants to the public (the Pompa Gladiatoria) and then there was a very popular show: The Hunting of Wild Animals or “venatio” which called on a great diversity of wild beasts mainly imported from Africa: Rhinoceros, hippopotamus, elephant, giraffe, lion, panther, crocodile, wildebeest and ostrich.

These festivals sometimes took on exceptional proportions: it is reported that Trajan, in 107, celebrated his victories over the Dacians with games involving 11,000 animals and 10,000 gladiators, for 123 days.

Today, the Colosseum is a major tourist attraction in Rome, with millions of tourists paying their ticket every year to visit the indoor arena. In 2001, a museum dedicated to Eros was opened on the upper floor of the building. Part of the arena floor was replenished the same year. The Colosseum has also been a site of Catholic ceremonies since the 20th century. For example, Pope John Paul inaugurated a new form of Stations of the Cross processions that take place every Good Friday.

Variations in temperature and humidity, earthquakes, downpours, urban pollution eating away at stone, overcrowding… The Colosseum is a sick giant. Each year, 500,000 euros are allocated by the Italian State to renovate the most urgent rooms. But this is not enough for more ambitious work. With nearly 5 million visitors per year (making it the most visited monument in Italy) and only 35% of the monument accessible to the public in 2010, the Colosseum continues its restorations to avoid traffic jams.

In 2010, he opened part of the Hypogeum to guided tours. Faced with the reduction in the budget of the Ministry of Cultural Heritage, the site had to turn to private sponsorship to close the budget.

The priceless gift of the Romans: the Colosseum

We continue by talking about what we know as the Colosseum, which is actually the Flavian Amphitheatre.

It is a fascinating and exciting story that evokes gladiators, ancient fights and often bloody duels, with ferocious animals, but also the community of Romans participating in the shows.

Why to visit the Colosseum?

Legend on the Colosseum in Rome: everything legendary makes it popular

It must be said from the outset that the Colosseum is the subject of many legends. It is an important building that still arouses admiration, especially for what it represents: the image of the power of the Roman Empire.

It is legendary for the engagement of the gladiators, for the crowds of men who come from all over the Empire to gather to admire the exotic animals of the most remote provinces. The accounts of those who knew the gladiators were grandiose, irreverent, so much so that listeners remained spellbound for hours.

Its legends, its tales, the strength of these men, still make it a meeting place after thousands of years. After all, we are talking about one of the most visited Italian monuments in the world: it seems that every year five million visitors come to Rome to admire it.

History of the Colosseum

An 8th century prophecy stating that as long as the Colosseum exists, so will Rome.

Ancient Rome Colosseum: a combination that gives life and sparkle to the future of Rome and to what the Romans bequeathed to all passionate Italians and not only to those who consider art and beauty as the heritage of the humanity.

History has wanted it since 1980 as a registered monument on the UNESCO list together the historic center of Rome. It was included in 2007 among the New Seven Wonders of the World by the NOWC (New Open World Corporation).

The amphitheater was consecrated in Flavian times on the eastern area of ​​the Roman Forum, its construction began thanks to Vespasian in 70 AD and ended with Titus after 80 AD. In fact, it was inaugurated on April 21, 80 AD. Further changes were made by Emperor Domitian in 90.

The building is recognizable by its elliptical shape with a perimeter of 527 meters and axes measuring 187.5 and 156.5 meters. The name Colosseum was popular in the Middle Ages and derives from the Latin adjective “colosseum”, which means colossal.

After all, no nearby palace is so tall and it certainly looked colossal in front of the small medieval houses. Re-enactments were famous throughout the known world of that time, there were gladiator shows and many other public events.

Shows included: hunting shows; re-enactments of famous battles; dramas, naval battles. The structure fell into disuse after the 6th century and served only as a quarry for materials. The Colosseum represented Roman social life, especially in terms of entertainment.

Admission was free, especially during organized games that entertained many citizens.

Also, the Coliseum represented the “panem et circenses” where play was free as were popular grain prices. This no doubt helped the emperor to keep possible future citizen uprisings at bay.

The Colosseum and the Palatine Hill

From the Palatine you can admire the grandeur of Rome: the Roman Forum, the Circus Maximus and a glimpse of the Italian capital of pure beauty.

It is possible to see establishments dating from the 10th century. The Palatine is the starting point, representing what, on a legendary level, has influenced Roman idyll throughout history.

It is the place where the history of Rome began in the 8th century BC. The place which was chosen by Romulus to found Rome. It was also chosen by Augustus as his place of residence. This site is of immense value and must be visited to experience the ancient culture and to admire the beauty that remains despite the ages.

What to see on the Palatine:

“A heart beats every time we talk about Rome”, as you can read in the description of the Palatine.