The Pantheon: an open-air museum that can only be visited in the Italian capital, the Pantheon is one of the most recognizable and emblematic places in Rome. It is also one of the oldest buildings still standing and was the most visited in 2019, before the pandemic.

For lovers of culture and beauty, this is a must visit place if you are in Rome. In fact, the Pantheon is located right in the center, a few steps from Via del Corso and very close to Piazza Navona.

Located in the square of Minerva (Piazza della Rotonda), it is famous in Rome, not for its size, but for its beauty. In the center of this square, there is a beautiful Renaissance fountain with an elephant, the base of an obelisk.

The obelisk of Minerva was placed on top of a marble elephant, designed by Gian Lorenzo Bernini and dating from the 4th century BC. J.⁠-⁠C. Until the 19th century it housed a fish and fruit market, a very special story told over the centuries.

As it is an open-air museum, we can visit it safely. Let’s discover the beauty that the Pantheon of Rome hides. 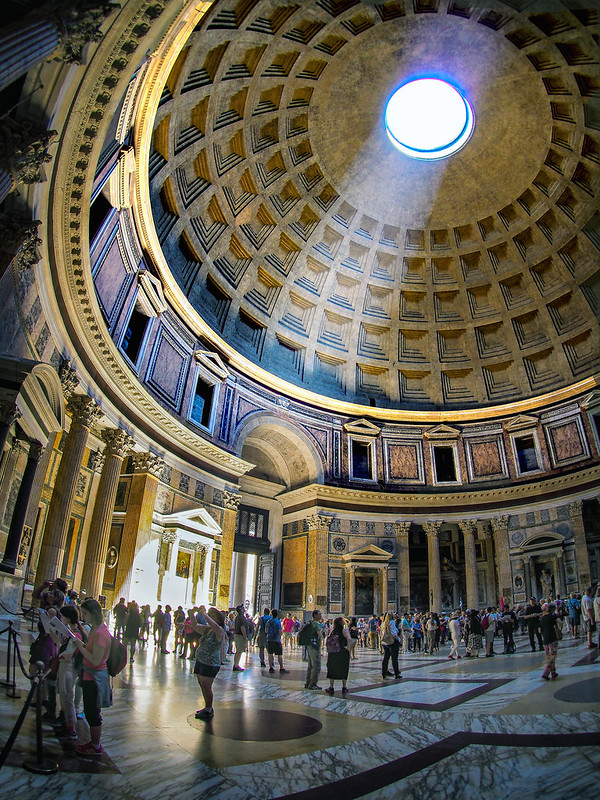 What to see there?

Let’s start by saying that it is the best preserved monument of ancient Rome, one of the most prestigious and recognizable. Its history is special, like that of many places of worship in Roman times.

During this second reconstruction, its height was increased to an impressive 43 meters with a large dome with a central oculus.

There is no mention of Hadrian’s name. During the 7th century, the Pantheon was given to Pope Boniface IV and transformed into the church we know today. It is perhaps precisely for this reason that we find it intact: it escaped no less than two World Wars and the deceptions and quarrels of the time.

One of the peculiarities for which it is absolutely famous, besides its beauty, is that it rests on 16 columns, which gives it a majestic grandeur. On the facade of the Pantheon, there is a Latin inscription: “Marcus Agrippa, Luci filius consul, tertium fecit”. That is to say: “It was built by Marcus Agrippa, son of Lucius, three times consul.”

To enter inside this beautiful monument, you have to go through a bronze door.

Important: admission is free but you can opt for an audio guide or a guided tour to learn all about this extraordinary monument.

A masterpiece of architecture and engineering that the whole world honors: the Pantheon in Rome

The real masterpiece is not just on the outside, that is, in the building, but turning our eyes entirely to the sky, we find the magnificent dome.

One of the most majestic in the world, with more than 2000 years of existence. It is even larger than the dome of St. Peter and that of Florence Cathedral.

In fact, the diameter of the dome is equal to the height of the building: a perfectly spherical space which makes it a marvelous temple. This element alone could make us fall in love with the building. But when you visit Rome’s Pantheon, you’ll see more. Let’s go and find out more!

Oculus Pantheon Rome: what is it?

It is a hole that you can admire inside the dome; it was used for the study of astronomy. The legend says that no rain can enter the Pantheon: it does enter, but it is nebulized by the “chimney” effect of the dome.

In the center of the building, however, there are drainage holes.

What can be found inside? Let’s talk about frescoes and tombs.

Its circular shape allows the Pantheon to become a frescoed art gallery with many works to see. One of the most famous is the Annunciation by Melozzo da Forlì.

Very important people are buried inside, such as Raphael Sanzio, one of the most important artists in Italian Renaissance history. Some members of the Italian royal family are also buried: Victor Emmanuel II, Umberto I and Margaret of Savoy.

How to visit the Pantheon? What you need to know for a comprehensive tour of Rome

Visit Pantheon Rome : Admission is on the following days and times:

If you want to know the price of the Pantheon Rome, know that fortunately the Pantheon can be visited for free and that the entrance is free. It is therefore not necessary to buy tickets for the Pantheon in Rome to visit it.

However, to avoid possible queues on public holidays, you can book on the dedicated Pantheon website.

Last entry is at 6:30 p.m. It is good to remember this so as not to be disappointed. You can book the visit with Audio-guide Rome Pantheon or also with a paper guide including Pantheon Rome map and a guided tour to see the Pantheon.

You can book the visit with audio guide for 8.50 euros on the website. Also, you can book a tour in Italian or English from 20 euros.

Pantheon Rome visit: conclusions on this site of interest.

Seeing such an ancient and well-maintained structure in all its splendor makes us fall in love with Rome. The Pantheon is not just an architectural work, it embodies Roman history and culture. It represents a history inherent in the city and the world, but which sometimes seems forgotten.

Rituals, sacredness, good and evil deities, and earthly personalities have all tried to capture this beauty. None of them really succeeded, because the Pantheon survived human nature for thousands of years, preserving itself in its total beauty.

The free visit does not detract from the possibility of grasping its nuances by purchasing a paper guide or an audio guide, which are always useful to find out more.

It is also possible to request and book a guided tour, with expert staff who can tell the story of the Pantheon in an exciting and realistic way.